The pandemic has brought both disruption and innovation to the cosmetics and beauty industry, plus unique opportunities for traders and investors. Check out some attractive cosmetics stocks to buy, short and invest in now. 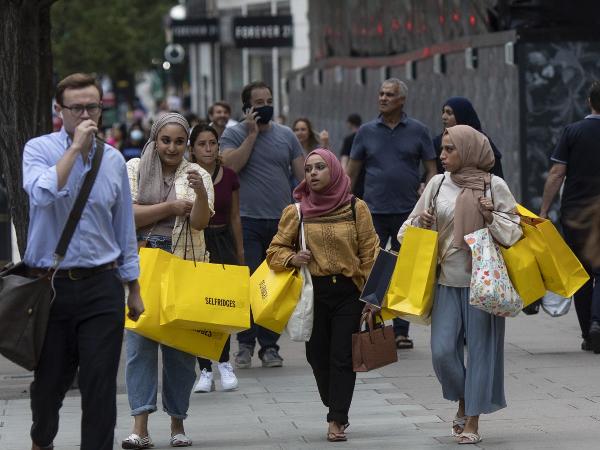 What's on this page?

London Stock Exchange (LSE) listed powerhouse Unilever is perhaps not the first name you’d associate with cosmetics. However, in 2017, it created a new company called Unilever Cosmetics International, housing some of the company’s beauty brands, including Tom Ford fragrances and Calvin Klein fragrances and cosmetics.

Unilever also has under its umbrella the Prestige Group, a subdivision for other higher-end cosmetics brands, including Dermologica, Living Proof and Kate Somerville. It also owns Dove, Axe and Brut, making the company a force to be reckoned with in the fragrance space as well.

During the first quarter (Q1) of 2021, the company’s beauty products category grew by 2.3% and, interestingly, the Prestige Group showed strong sales as the self-care trend swept a self-isolating globe. This was on top of Unilever already reaching its pre-pandemic sales growth figures by the first week of February, weeks before the end of Q1 2021.1

Unilever has also announced that it aims to increase future profits by spending over €1 billion in various strategies, such as the very on-trend expansion of its cruelty-free, plant-based beauty products. 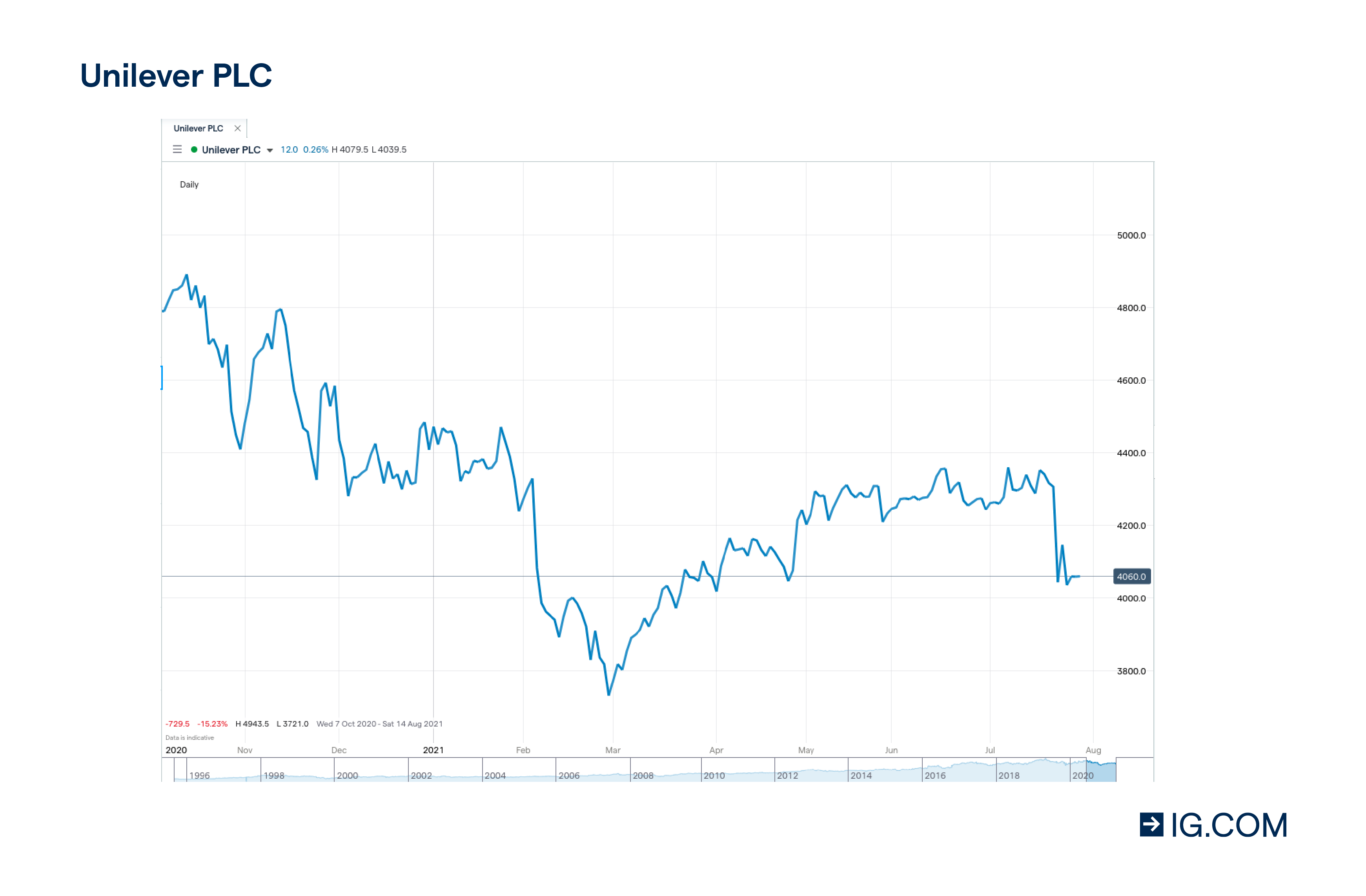 Japanese company Kao Corporation is one of the biggest beauty and cosmetics players in the world, owning well-known brands such as Kanebo, Bioré, John Frieda, Molton Brown and more. Much like Unilever, the business is well known for its bullish acquisition of cosmetics brands. However, Kao is even more storied, tracing its roots all the way back to 1887.

With its mighty market cap of over ¥29 billion, Kao outstrips even Unilever in size. This didn’t shield the company from having a rocky 2020 though, with revenues of its cosmetics business dropping over 22% compared with financial year 2019 (FY2019).2 The company also has a sizable Kao Salons division, which also suffered in the wake of the year’s quarantines. However, Kao’s many other businesses, especially those producing hand sanitisers and home cleaning items, bolstered its performance.

Kao Corporation has said it’s putting a significant investment into its cosmetics business, despite 2020 losses, and in particular is overhauling its ‘digital offering’. This is to make a compelling new e-commerce functionality available – a move sure to be greeted with enthusiasm by an increasingly online shopping world.

Another thing that bodes well for Kao is its often pioneering social conscience, with its zero carbon dioxide (CO2) emissions by 2040 plan and being one of the world’s most ethical companies for the fifteenth year in a row.2 Research has shown this to be vital for the very influential Generation Z consumers, a fact Kao seems well placed to benefit from. 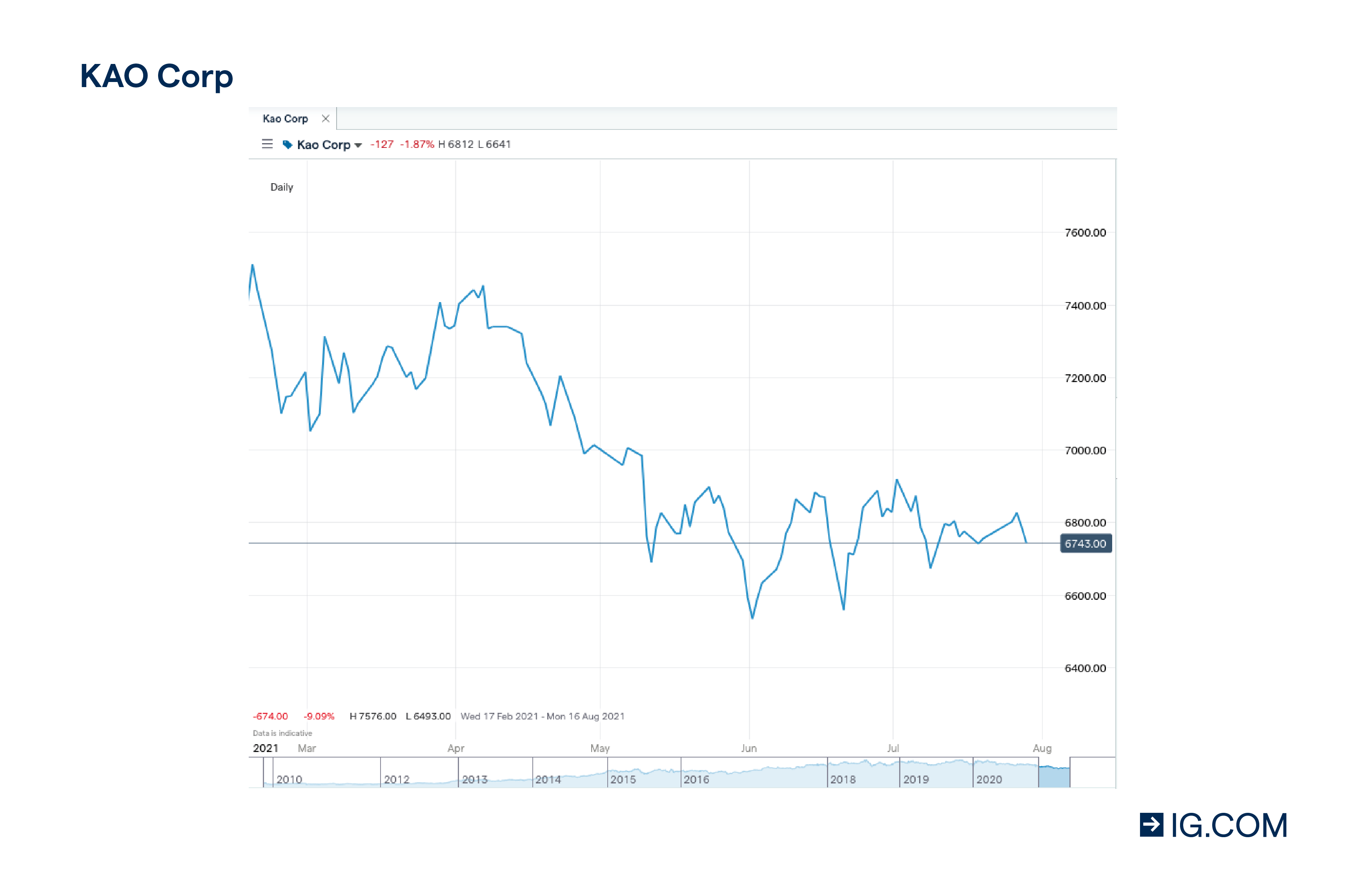 Coty’s recent results show a disruption from Covid-19, due to the decreased use of cosmetics and fragrances with the prevalence of self-isolation. Its latest results show an overall decrease in revenues of 3.3%, including a mass net decrease in sales of 14.3%. However, the company’s e-commerce business and Asia sales rose over 30%, plus prestige brands showed a 6.5% increase in revenue.3

Partially, this was due to the company owning the license for Burberry fragrances and cosmetics. While Burberry’s fashion line took a predictable beating from the pandemic, its 2021 Q1 results showed the company’s beauty sales, under the division of ‘children’s, beauty and other’, reported an increase from £127 million in 2019 to £144 million in 2020.4

Coty has also said that it expects to end the summer with net revenues somewhere between $4.5 billion and $4.6 billion, plans for which include a high-profile relaunch of Kylie Cosmetics. L'Oréal is a name that needs no introduction, the French cosmetics and hair care giant is more than a 110 years old.

The beauty brand showed its staying power in its latest results, going from a 4% drop in overall sales figures in 2020's Q1 to a 10.2% increase in 2021's Q1, mostly from skincare lines like Lancôme and Kiehl’s. However, most impressive in these results is a glamorous 47% increase in e-commerce sales over the same period, , as digital shopping becomes increasingly popular.5

The company seems keen to keep this momentum going, with recent releases announcing new eco-refill packaging. There are also plans to capitalise on its 2018 acquisition of the beauty and fragrance arm of fashion house Valentino, with a roll-out of new Valentino stores in the US. L'Oréal seems well placed to continue to give its shareholders dividends. 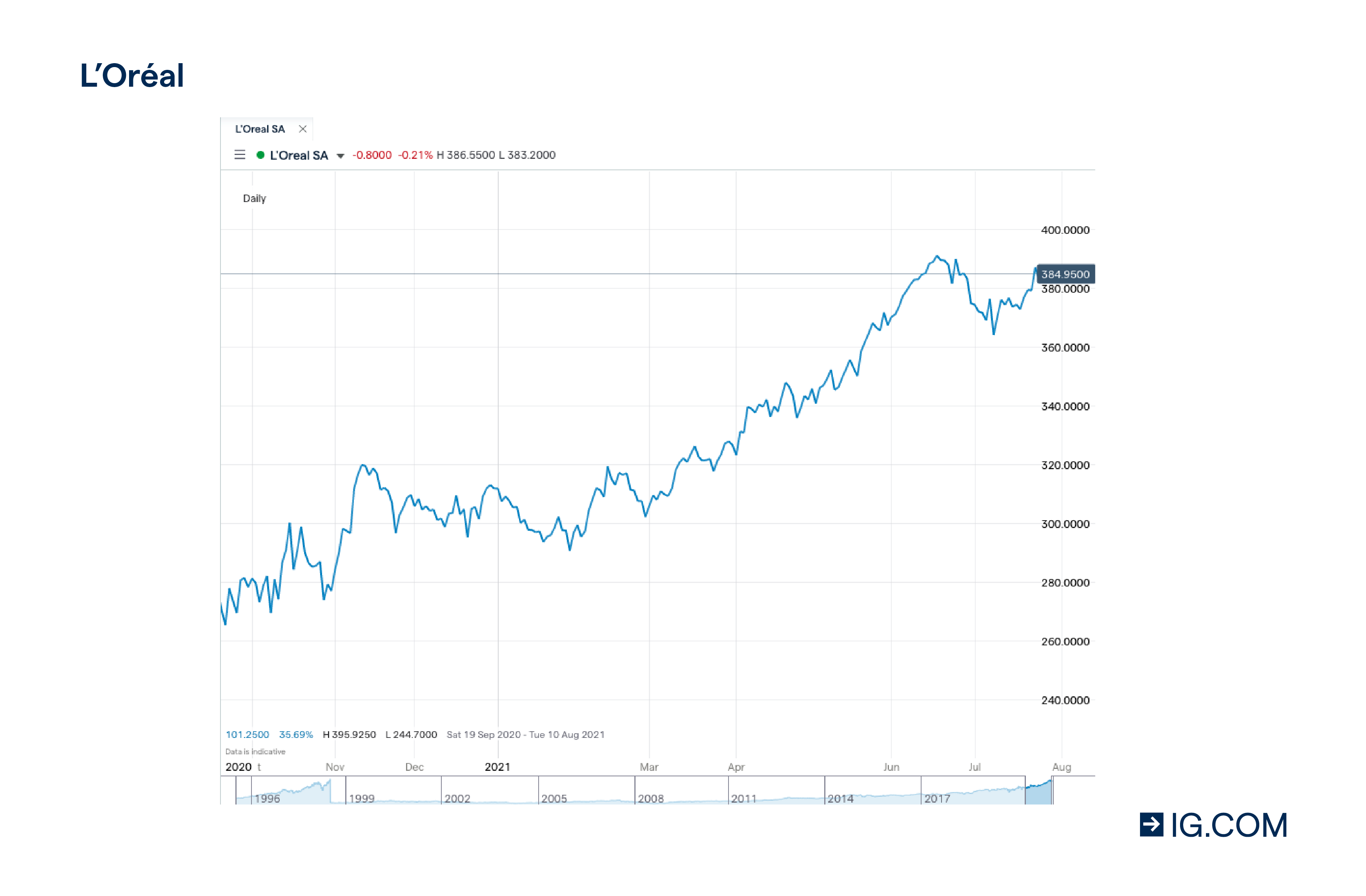 One of the oldest and largest US beauty brands, The Estée Lauder Companies Inc owns many of the world’s most famous cosmetics and fragrance names, from Clinique to Tommy Hilfiger, Jo Malone, Bobbi Brown, La Mer and, of course, the eponymous Estée Lauder.

The company’s latest results of 2021's quarter three (Q3) showed a profit of $456 million, compared with a net loss of $6 million in the same quarter in 2020. This was largely due to an increase in sales for Estée Lauder, La Mer, Jo Malone London, Clinique, and Tom Ford cosmetics, as well as double-digit growth for these in Asia specifically. Both earnings and sales figures were ahead of analysts’ expectations and forecasts were rosy. The company forecasted a net sales increase of 11% to 12% for 2021.6 Reported diluted net earnings per common share are also projected to be $5.48, approximately. 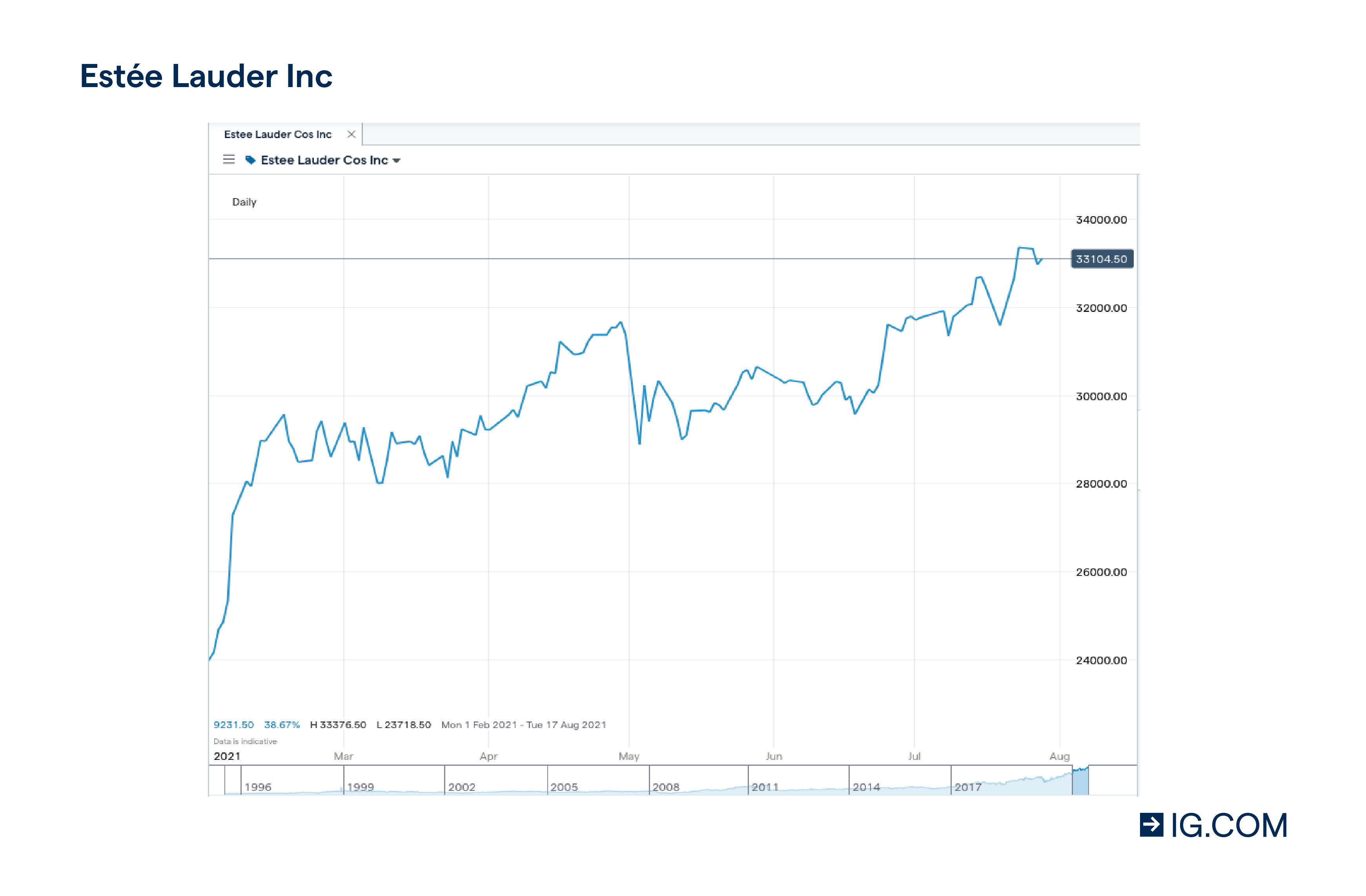 How to trade or invest in cosmetics stocks

You can invest in US stocks commission free and UK stocks from as little as £3 with our share dealing service,8 or trade on their prices using spread bets or CFDs.

What you need to know about the cosmetics and beauty industry

Cosmetics stocks is a broad term for companies selling makeup, toiletries, hair products, perfumes and even feminine hygiene products. It’s a huge industry, estimated to be worth over $500 billion globally.

Cosmetics is a small pond, with the vast majority of brands all belonging to a handful of ‘parent companies’. These include The Estée Lauder Companies, L’Oréal and Coty.

Cosmetics stocks have had a mixed bag in 2020 and 2021, with some performing well while others were disrupted by the pandemic. Traditionally, cosmetics stocks are governed by the so-called ‘lipstick index’. This means that, in tough economic climates, certain luxury items such as lipstick will do well as people ‘treat’ themselves with smaller items, while cutting back on larger splurges like holidays. The pandemic certainly caused a dip in lipstick sales, as surgical and cloth masks became the norm, but caused strong growth in other cosmetics such as eye makeup and skincare.

7 Awarded ‘best finance app’ and ‘best multi-platform provider’ at the ADVFN International Financial Awards 20208 Deal three or more times in the previous month to qualify for our best commission rates.