Rising interest rates are a natural part of the economic cycle and those who pay close attention to the bigger picture and seize the fleeting opportunities to profit in a rapidly changing environment. 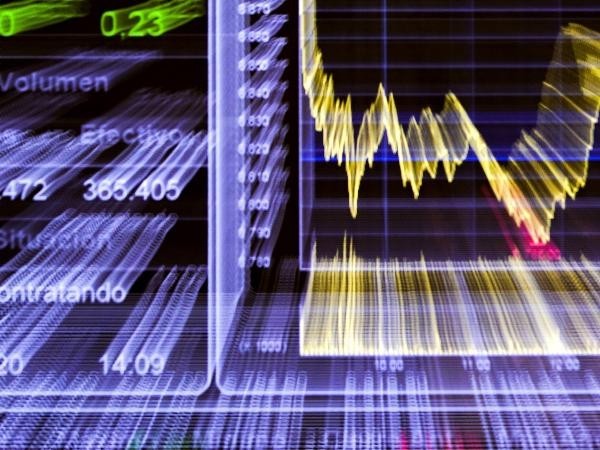 With little surprise, the Federal Reserve has raised US interest rates for the first time since 2018 by a 25 basis point on March 16th. Since December 2021, the Bank of England has increased the UK’s borrowing costs and voted for its third consecutive increase this month.

The Reserve Bank of Australia, who initially insisted there would be ‘no rate hike until 2024’ throughout the second half of 2021, recently said that raising interest rates was ‘plausible’.

Twelve emerging markets raised their interest rates in 2021, and investors can expect the European Central Bank, which has not raised rates for more than a decade, to follow the ‘main trend’. The message from the rate-setters was clear: more rate rises, faster than usual is expected as long as inflation continues to be a concern.

Hence, the question is, how do you preserve or grow the value of your portfolio under the complicated economic environment when the capital rate is poised to change?

How high interest rate can be?

At this stage, the US Central Bank plans to hike the rate six times this year and move the capital cost close to 2% in nine months. The chairman of the Fed, Jerome Powell, indicated that the Fed would raise rates more aggressively if needed and just one week after the first rate hike.

There’s a growing sense that as the inflation rate is flying high, an abrupt change of monetary policy is necessary to curb the risking price hard and fast. However, the reality is more complicated.

On the one hand, the fragility of the global economic recovery after a two-year-long pandemic is facing the greatest challenge as the stimulus assist has been removed. On the other hand, the surging prices are squeezing household incomes and dragging economic growth as a consequence. As such, either risk event may keep a cap on interest rates. 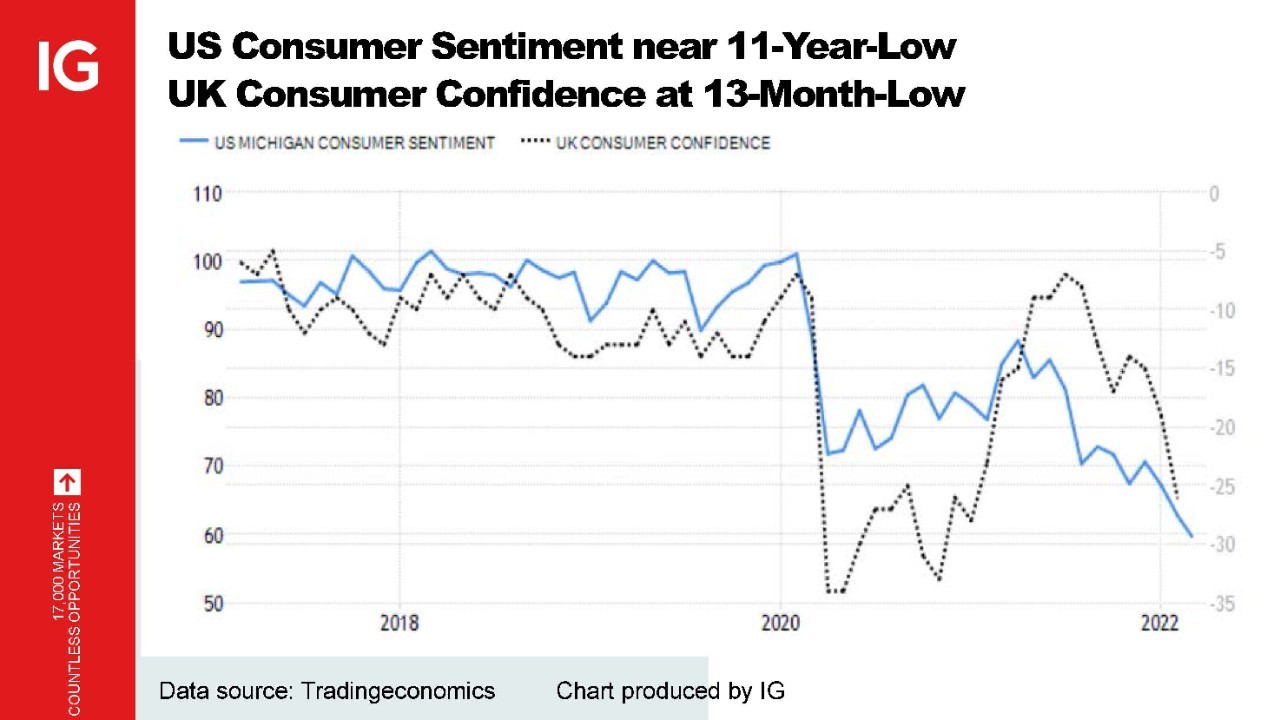 Even though we are not expecting the interest rate to move above the 5% level as seen back in the 1990s or even the 2.5% that hasn't been seen in G7 countries in over a decade, the era of cheap financing has ended. As a result, the investment strategy has been driven by the almost-free money that needs to be revised.

Knowing where we are in the economic cycle and where we are heading is undoubtedly the most crucial step before investing.

For example, one of the best-known concepts to associate the economic cycle with an investment strategy is called Merrill Lynch's Investment Clock. The framework splits the economic cycle into four phases with each being determined by the direction of growth and inflation. Based on each phase, the clock suggests the best-fit investment asset look upon.

According to Merrill Lynch's Investment Clock, if you are looking to invest in the US or UK in 2022 as they fight decades-high inflation, the clock suggests their economy sits in the phase of 'overheat' and could potentially slip into 'stagflation' if the economy slows down while rates rise. As such, commodities, defensive stocks like staples and utilities would fall under the direction of funds flow.

It's not to say that investors should copy all the trends the clock suggests, but it is worth checking the position regardless of domestic or global events while planning your investment strategy. 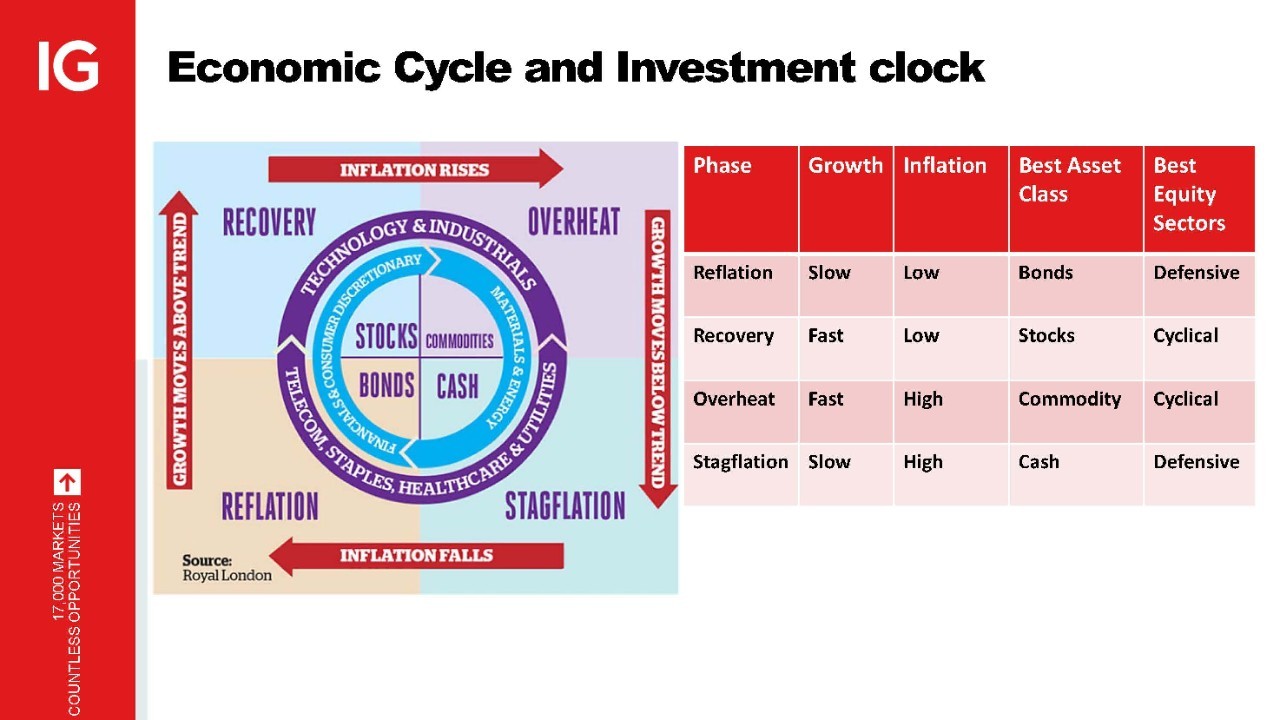 Generally speaking, when the interest rate rises, bond prices usually fall, and vice-versa. As interest rates rise, the lower fixed interest rate paid by a bond would no longer be attractive to the prudent investor thus leading to a decline in demand and price. A lower price, however, would benefit the yield because a discounted price pushes the long-term return higher.

In terms of bonds, long-term bonds may be more volatile than shorter-term ones due to the rapid changing rates (which we are experiencing now) being considered to endure higher risk over a longer period. 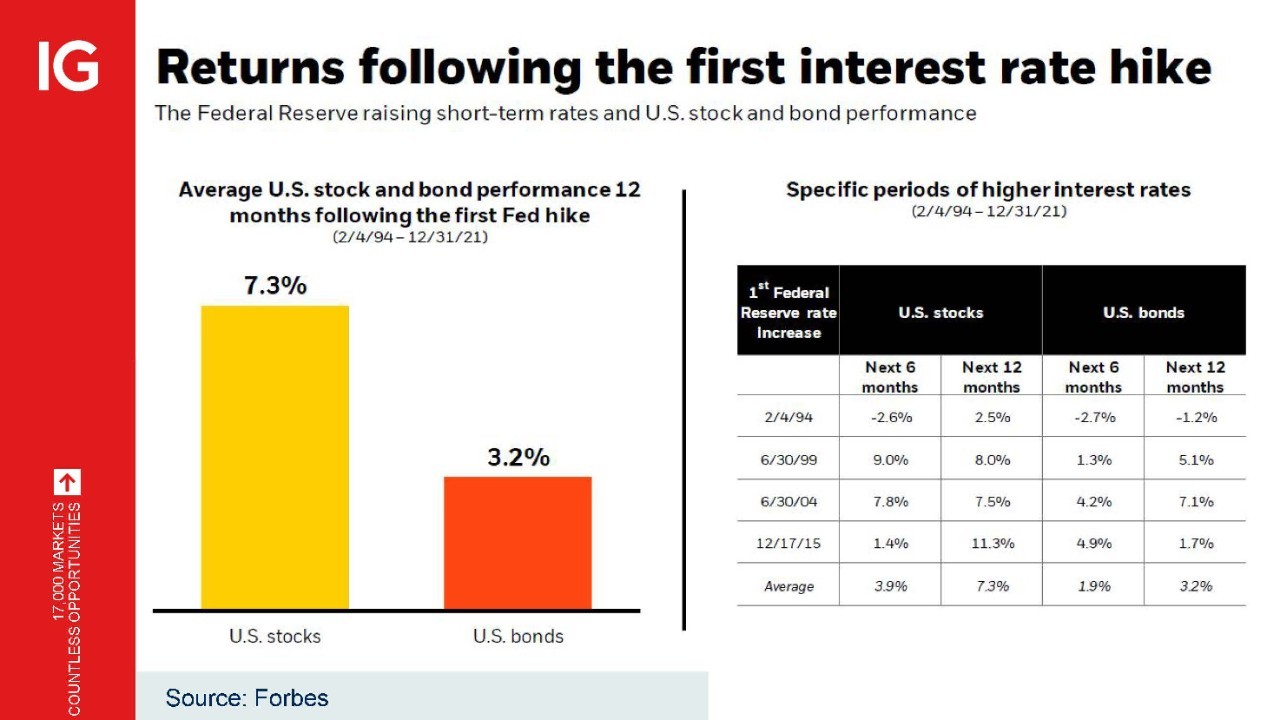 So far global stocks have gained approximately $5 trillion in market capital after the Fed’s ‘unsurprised’ first-rate hike decision in four years. Moreover, it looks like investors have digested the ongoing concerns over the geopolitical tension in Ukraine and rising rates. However, it may not be safe to say that the risk equity market is on its way to recovery.

In theory, higher rates will discourage investors from injecting money into the stock market as business profitability is squeezed by the capital cost. Based on this, company shares are predicted to be traded at a lower price — especially after two booming years where double-digit returns were not uncommon. 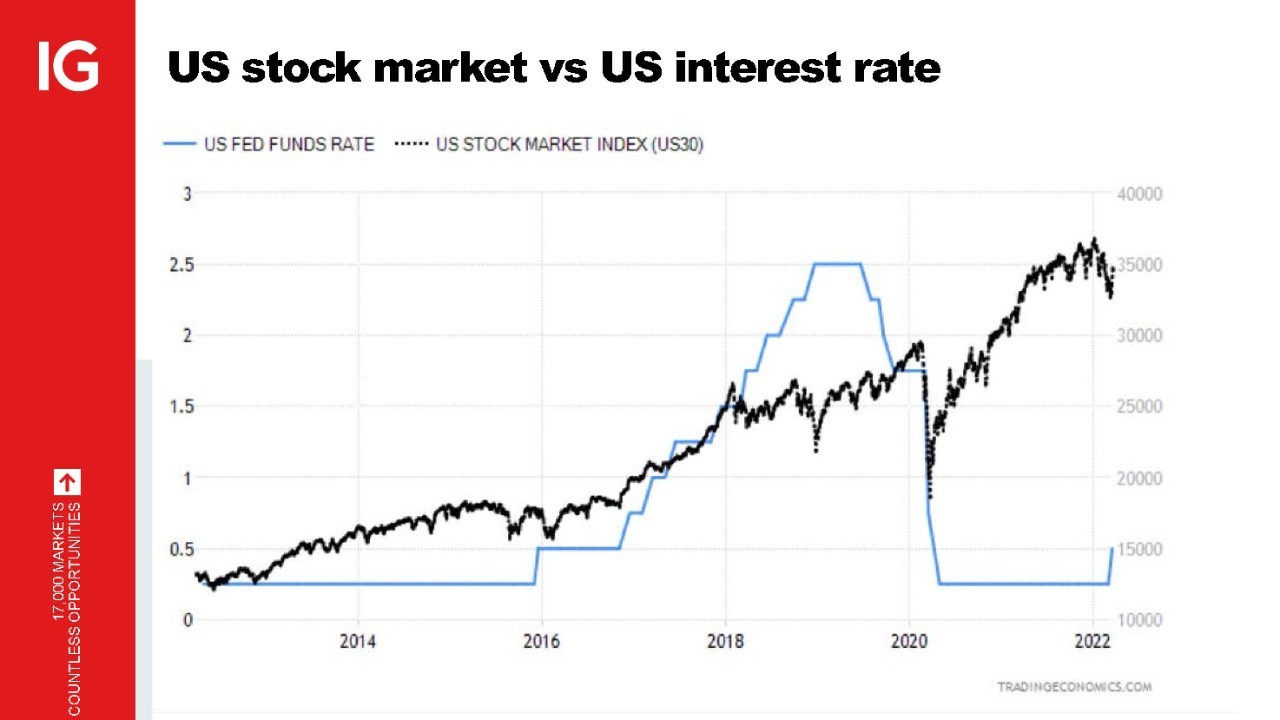 The market, based on history, can show excellent resilience during the rate hike cycle. As shown in the chart below, during the five-rate hike cycle in the past three decades, the three leading stock markets in the US only declined during one cycle. Notably, the tech-heavy Nasdaq, which is believed to be the most susceptible, outperforms the S&P 500 and Dow Jones for most of the cycles. 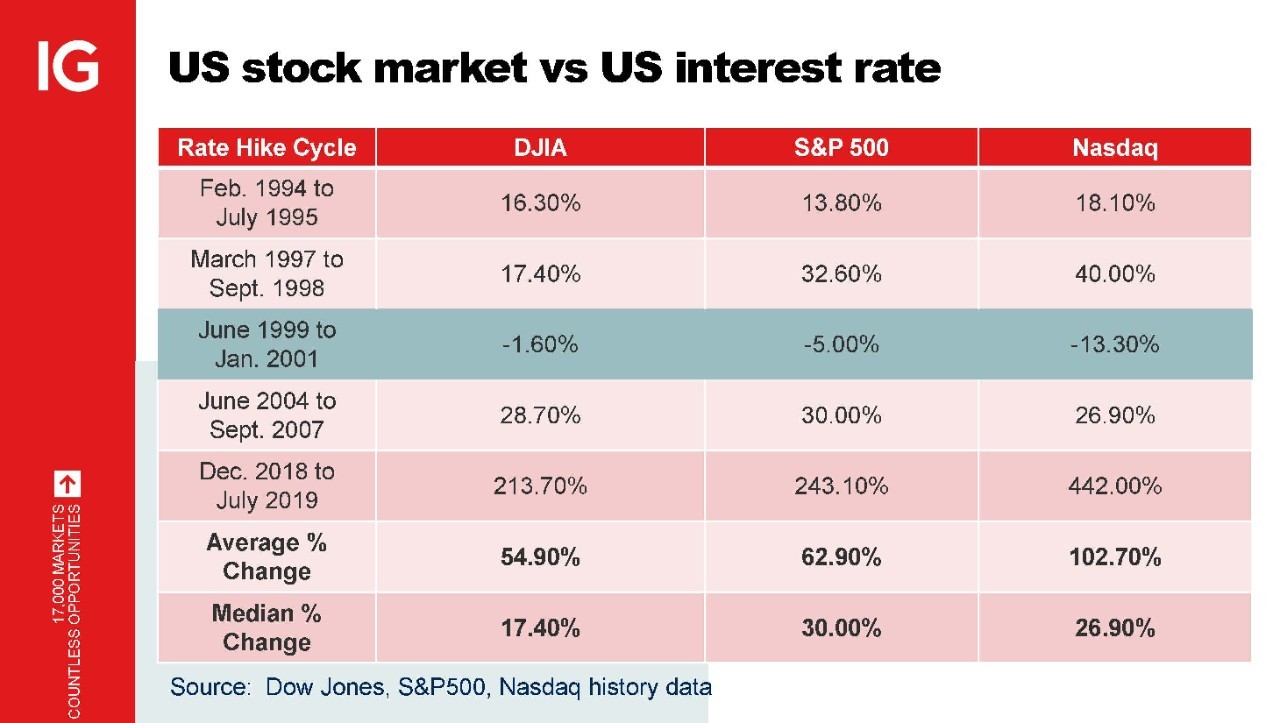 According to the charts above, a 16% to 22% median gain (aside from the sharp rebound between 2018 and 2019) is still a reasonable expectation for the investors to grow their money tree in the stock market but not all the sectors perform equally. Sectors like financial stocks tend to welcome the rate hikes as higher rates introduce higher margins. Real estate and energy businesses are the other examples as their prices surge higher during the inflationary period.

On the other hand, rising rates tend to be a nightmare for growth stocks, especially tech start-ups while established and sizable tech firms will be more likely to survive as those businesses enjoy the competitive advantage to pass on rising costs. 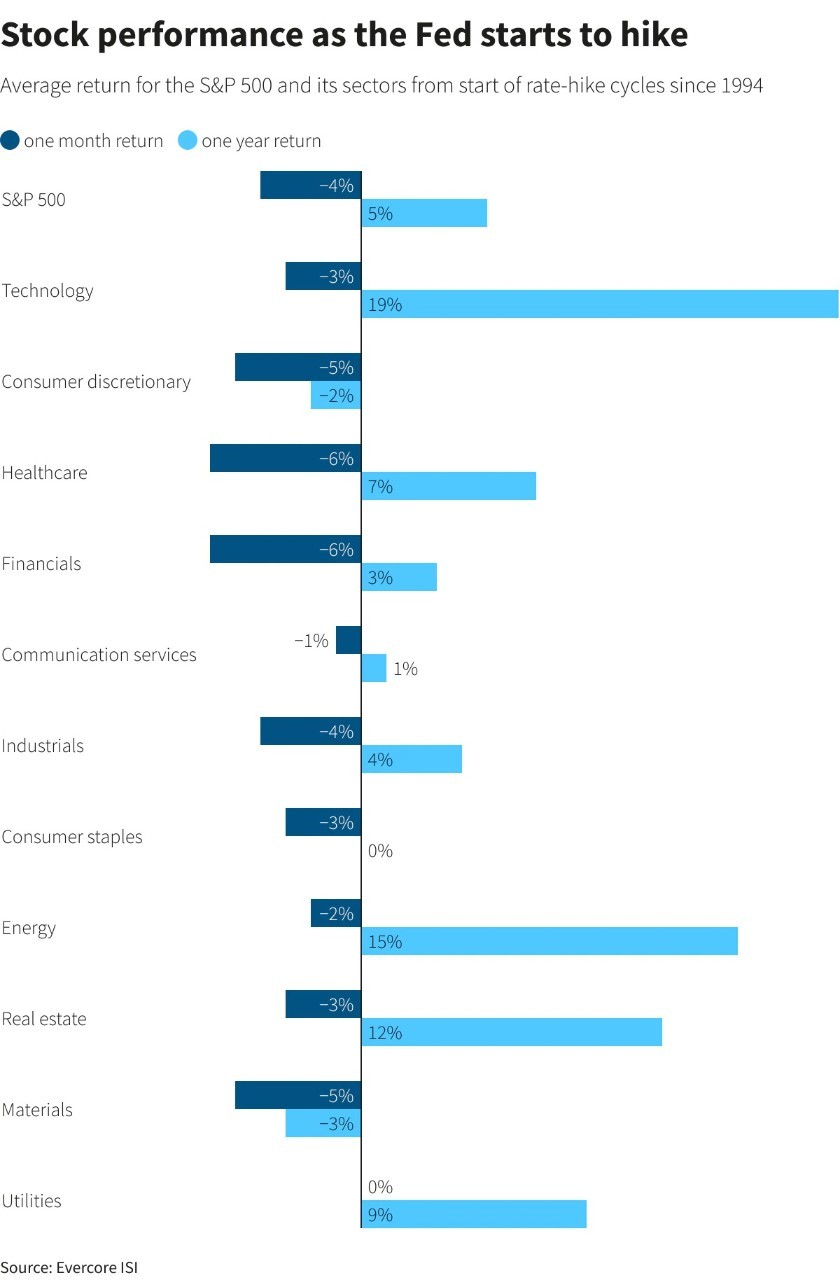 As mentioned in Merrill Lynch's investment clock, commodity assets are investment darlings during the ‘overheat’ economy cycle as demand is surging. When the economy enters the low-growth ‘stagflation’ phase, higher interest rates will turn to be a negative factor for commodity prices as the cost of holding inventory increases leading to more supply being available. The charts below demonstrate this inverse relationship between oil and gold. 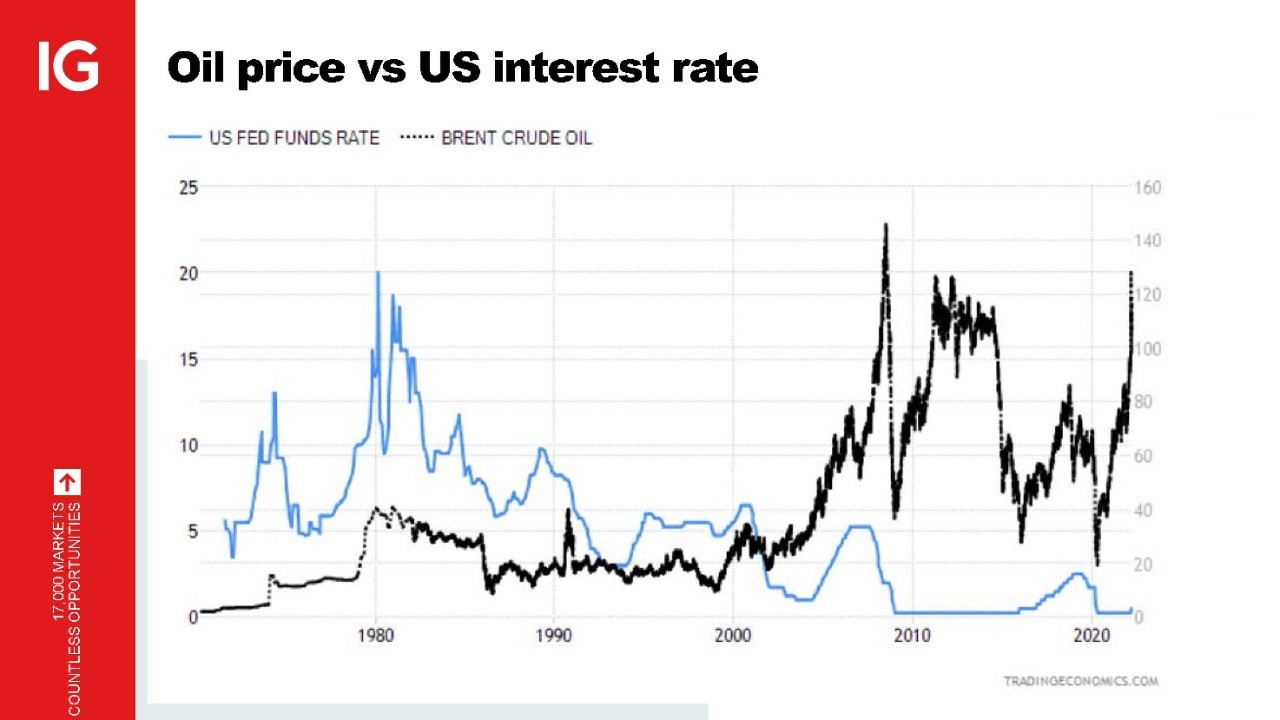 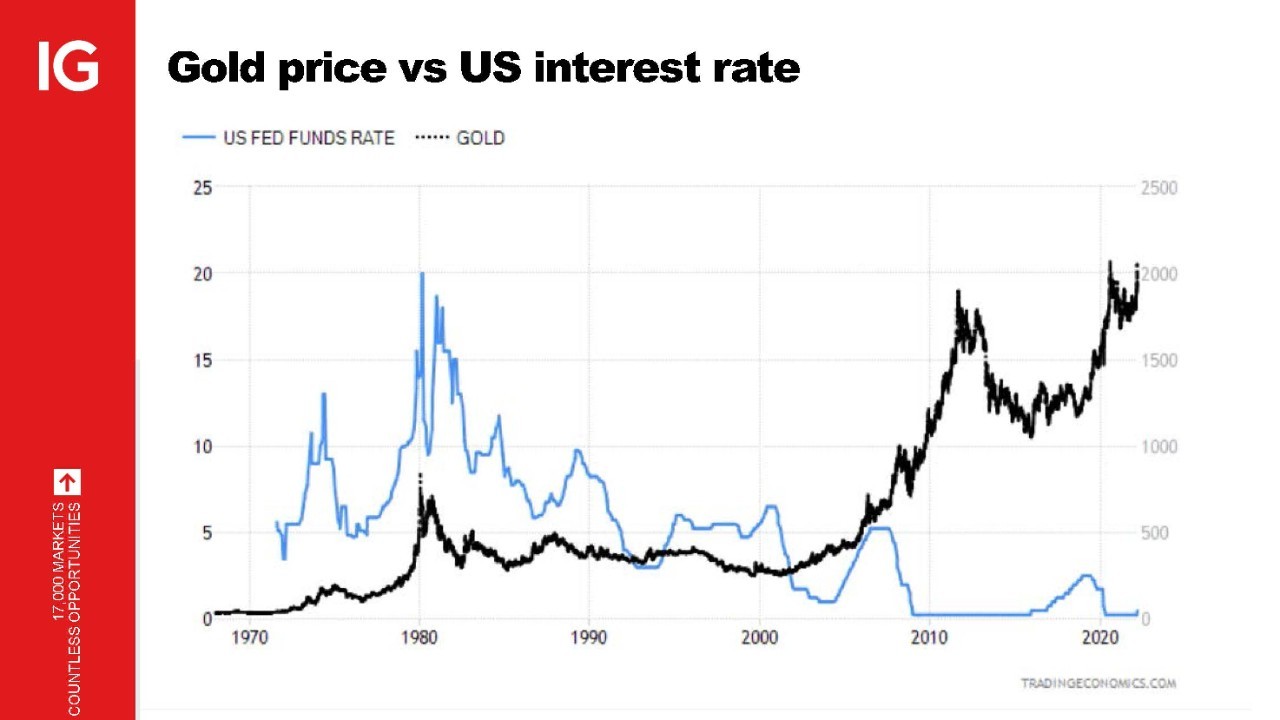 Even though history often repeats itself, reality is more complex.

Fundamentally, commodities are market driven by the supply and demand curve, meaning that many factors besides a central bank’s monetary policy have an impact on its inventory pool and will move the price in either direction. For example, commodities such as oil, gold, aluminium, wheat, and gas are anticipated to experience a long-term sequela following the global sanctions on Russia.

Overall, history has taught us that interest rates will not stay low forever and are a natural part of the economic cycle. It is difficult to predict how far or how fast the rate will climb and those who pay close attention to the bigger picture of the economy can seize the fleeting opportunities to profit in a rapidly changing environment.