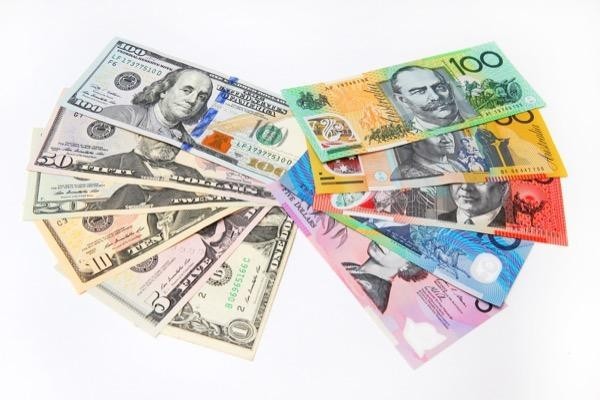 Asia-Pacific markets may see a mixed day of trading to close out the week as markets continue to whipsaw. US stock indexes fell overnight, led lower by a 1.46% drop in the high-beta Nasdaq 100 index (NDX). The US Dollar DXY index rose to its highest level since June 01, 2020, as investors traded their stocks for cash and Treasuries. Chinese stocks may underperform across the Asian equity space after a US-listed Chinese technology ETF lost over 5% overnight, the biggest one-day percentage drop this year. China’s economic growth may be challenged if commodity prices continue to rise.

Aluminum hit a fresh record high, and iron ore and copper prices saw strong buying. That boosted the commodity-linked Australian Dollar versus most of its major peers. AUD/USD rose to a new 2022 high and, EUR/AUD sank to levels not traded at since October 2017. The 10-year/2-Year Treasury curve, measured by the difference between the two rates, fell to 31 basis points overnight, the lowest since March 13, 2020. That flattening may signal a lack of faith in the Fed’s ability to temper inflation while preserving economic growth.

The sanctions levied on Russia have led to a broad rise in commodities from metals to grains to energy products. However, WTI and Brent crude oil prices fell after hitting fresh highs early this morning on news that the US and Iran are in the final stage of restoring the 2015 nuclear deal. While issues remain, an agreement would bring much-needed barrels of Iranian oil into the market. Western sanctions have not targeted Russian oil, but many shippers are wary to take delivery.

This morning, South Korea’s consumer price index (CPI)reported a 3.7% year-over-year rise for February, up from 3.6% y/y in January. Japan’s January unemployment rate rose to 2.8% from 2.7%. Australia will see a final update to January retail sales after the preliminary figure disappointed at -4.4%. Elsewhere, the Philippines and Thailand are set to release inflation data, and February PMI figures for India will drop. Hong Kong retail sales for January are also due out.

AUDUSD is moving higher after prices pierced above the 200-day Simple Moving Average (SMA) overnight while pushing into fresh yearly highs. The key moving average may provide support if bulls lose momentum. The October 2021 swing high would be the next major level if prices continue higher. That is near the 161.8% Fibonacci extension from the January swing high/low. The Relative Strength Index (RSI) is approaching the 70 overbought level, while the MACD oscillator points higher. 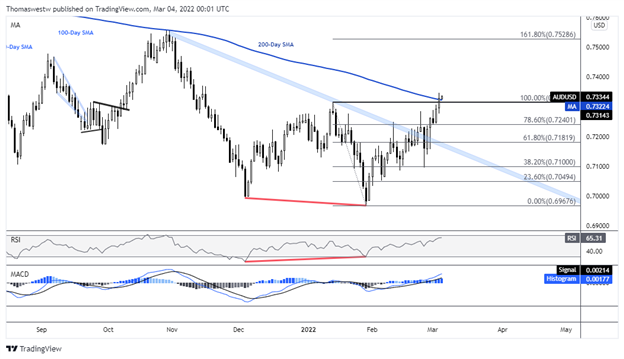