It is finally upon us: the FOMC rate decision is due today in the early afternoon of the New York trading session (at 19:00 GMT). Even if the central bank’s updated forecasts and rhetoric don’t override the year-end liquidity drain to fuel the next systemic trend, anxiety over a possible significant course correction has effectively curbed the speculative reach through the first half of the week. For most of the risk-oriented assets I follow for a read on speculative appetite, there has been a slow but distinct slide from highs for weeks. The exception has been the US indices which have tagged (or come close to) record highs. With a contrast of middling junk bonds or carry trade and a 13-month low emerging market ETF (ETF), the S&P 500’s pullback these past few days looks like a practical pullback on excessive premium. This past session’s gap for the SPY S&P 500 ETF amid a pickup in volume looks like a comfortable move back into range. This deflates the potential of a natural ‘disappointment’ from the market to the outcome, but a charge to clear 470 or 450 (4,700 and 4,500 on the underlying index) will be substantially more difficult to achieve. 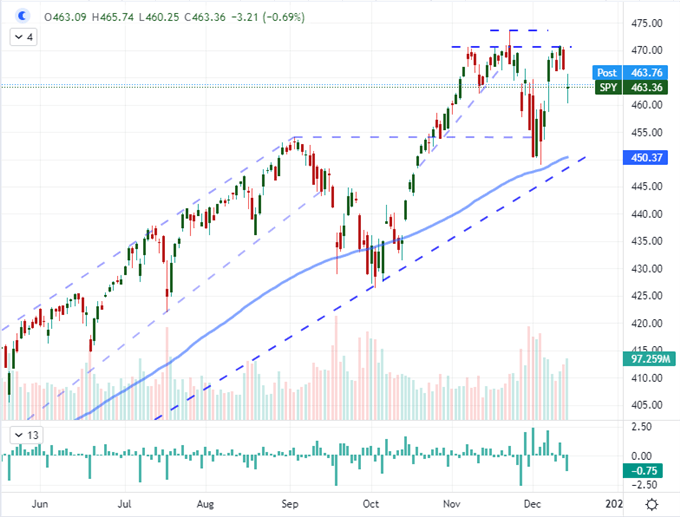 A ‘de-risking’ before a major fundamental event is not at all uncommon. In fact, it is standard playbook for professional market participants and those individuals that have been active in the markets for some time. That said, not everyone plays by the same rules. For those that have not had a lot of experience of trading through seasonal liquidity ebb and flow or do not believe events like the FOMC decision carry serious weight, the extended pullback through this past session may look like a prime short-term opportunity to employ the ‘buy the dip’ mentality. It is worth noting that some of the retail favorites of 2021 posted a substantial bounce this past session as most other liquidity measures were settling. Altcoin phenom Doge and meme stock favorites AMC and GameStop were among the highlights of a sudden charge from multi-month lows Tuesday. While trading at a discount relative to the likes of the S&P 500, these are not exactly inevitable opportunities.

Chart of Three-Month Change of Dogecoin with 1-Day Change, GameStop and AMC (Daily) 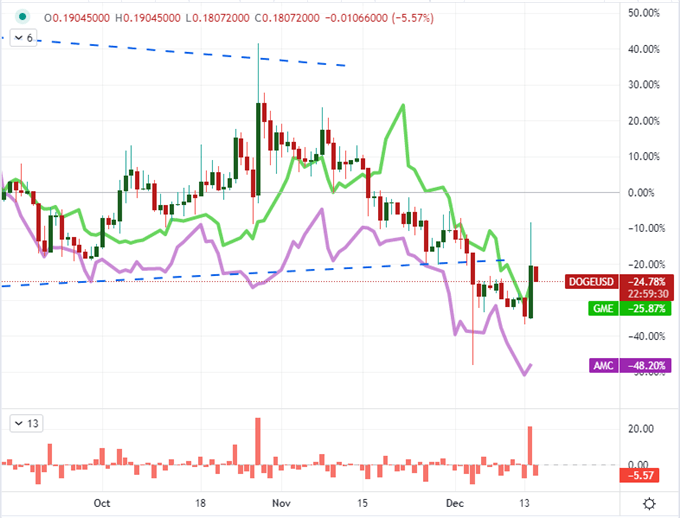 While there are a number of high profile events on the schedule over the next 48 hours, the market’s attention is no doubt uniquely focused on the FOMC rate decision. The US central bank will wrap up its second day of discussion with not just an announcement as to what it intends to do with its benchmark interest and monetary policy statement, it will further release its Summary of Economic Projections (SEP) and offer up Chairman Jerome Powell for Q&A. This is a particularly important monetary policy event as the Fed’s members have made fairly clear efforts to steer expectations of an impending shift in message. While the group is not likely to alter its rate today, there is a strong probability that they will announce a faster taper and upgrade its rate forecasts for 2022 and beyond. While a faster retreat from stimulus is its own important move, it will mostly be interpreted as a time table consideration for timing the first rate hike. The market has been pricing in multiple rate hikes next year for a few months in contradiction of the group’s last forecast of only one increase at its last SEP from September. It is these persistent market expectations that will change the response from the market to the data. 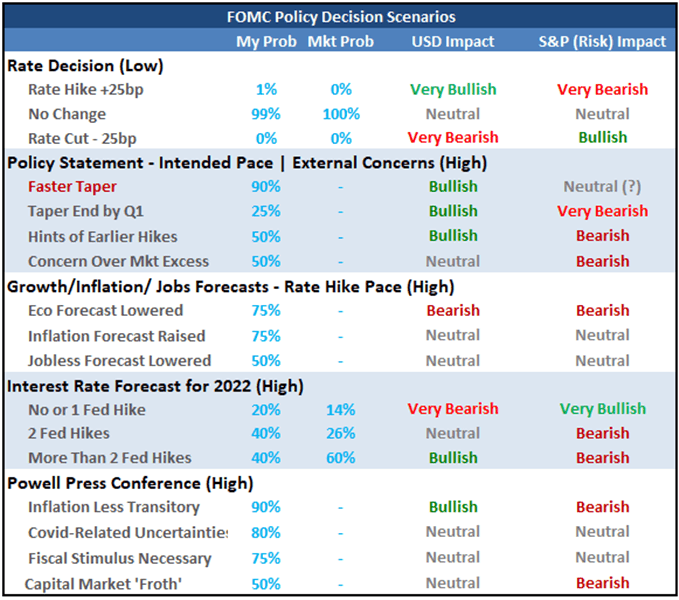 Chart Made by John Kicklighter with Data from Bloomberg

In general, the majority of the market expects that the Fed will either find it necessary to tighten up from its extremely accommodative stance next year – or be forced to. That anticipation likely played a critical role in lifting the Greenback to its 17 month high. On the other hand, US indices have held to record highs despite this strongly held anticipation. This natural course setting will likely skew the impact for different outcomes to the event. If the Fed were to maintain a dovish path with its previously stated pace of taper and maintain an average forecast of only one 25bp hike in 2022, the Dollar would likely take a substantial hit while the S&P 500 returns to a record high but struggles to extend follow through owing to a comfortable wind down of liquidity through year-end. If the Fed pushes its forecast for rate hikes up three hikes in 2022, there will likely be a hefty risk aversion in capital assets and the Dollar may actually register meaningful follow through. That said, the Fed attempts to ‘meet expectations’ as much as possible to avoid causing volatility in the financial system it attempts to protect.

Twitter Poll: What do You Think the FOMC’s Forecasts for 2022 Interest Rates Will Show 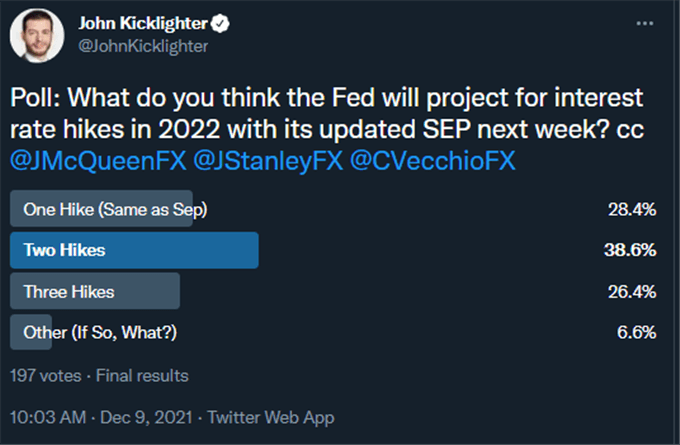 WHAT I’M WATCHING FOR WEDNESDAY

Naturally, the FOMC rate decision carries serious market-moving potential; and most of us follow the bright light of volatility wherever it leads us. That said, for outlets to this scheduled event risk, there are some serious caveats. EURUSD and GBPUSD have competing central bank decisions the following day. Meanwhile, AUDUSD, USDCAD and NZDUSD offer up counter currencies who are perhaps more suitable for carry contrast. My principal interest is in USDJPY which is has a head-and-shoulders pattern in place but also represents serious fundamental overlap. The two component currencies are both considered safe havens, though the US Dollar is taking on the guise of a carry currency. How this pair plays out can represent a critical guide to other crosses and even alternative markets sorting out their ‘risk’ position. 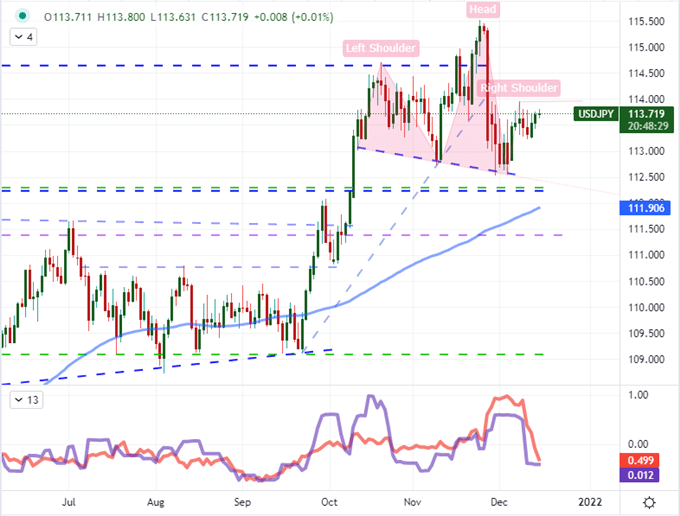 There is little doubt in my mind that the Fed decision is the center of attention ahead. Depending on what this major policy authority decides, the markets direction and tempo can be dramatically different. That said, it isn’t the only event risk on tap. For today’s session alone, we had the Chinese economic data for November, UK and Canadian inflation stats. After the Fed update, there is a fast and heavy run including New Zealand GDP, developed world December PMIs and a slew of major central bank decisions (ECB, BOE, SNB, BOJ, Turkey and Mexico). There is plenty here for isolated pockets of volatility and perhaps enough to tip a more systemic move above and beyond just the Fed’s influence. 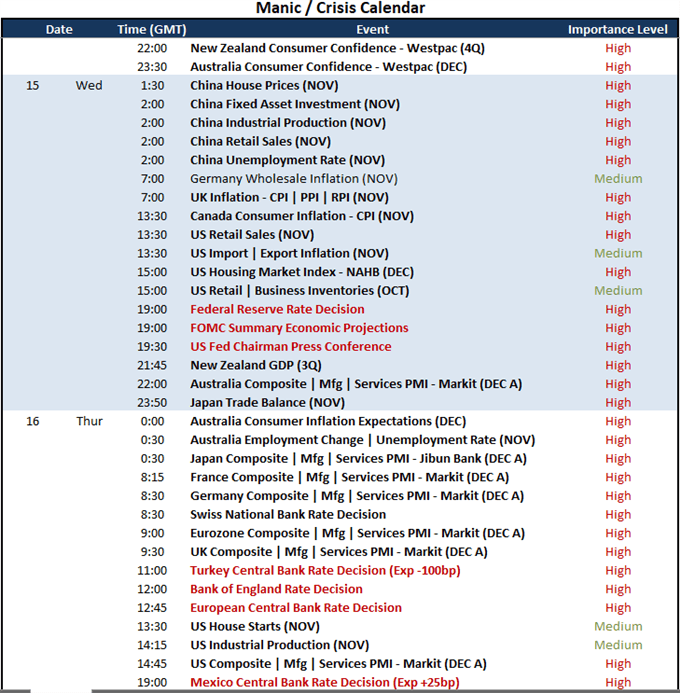 Calendar Made by John Kicklighter