Crude oil prices mounted a spirited recovery, with the WTI benchmark clocking in the largest one-day rise in two weeks. This was after the announcement of a plan by the US, China, Japan, India, the UK and South Korea to jointly release strategic oil reserves.

Speculation about just such a move was already weighing down prices earlier in the week. The markets’ response to the news implies that it underwhelmed relative to what was already priced into expectations. Seemingly lackluster commitments from world powers probably explain why.

For example, India and China are reportedly on the hook for just 5 and 7 million barrels, respectively. The UK has offered up just 1.5 million barrels. The US pledged 50 million, but a third of that will be accounted for by speeding up already-planned reserve sales and the rest are to be a part of an exchange.

Looking ahead, heavy-duty US economic data is in view before closures for the Thanksgiving holiday thin out liquidity. Revised second-quarter GDP data is expected to show a modest upgrade, the Fed’s favored PCE inflation gauge is seen accelerating further, and minutes from this month’s FOMC meeting are due.

If the PCE report echoes the upside surprise registered in analogous CPI data and the FOMC minutes document strikes a hawkish tone, an upshift in near-term tightening expectations and a parallel rise in the US Dollar might weigh against oil prices.

The weekly set of EIA inventory flow statistics is also on the docket, with an outflow of 1.5 million barrels projected by analysts. Leading API data argued for a 2.3-million-barrel build however. Crude may see selling pressure compounded if that proves to foreshadow a surprise on official figures.

Crude oil prices are retesting support-turned-resistance capped at 79.60. A daily close back above this barrier may set the stage for an upswing pressuring the swing high at 85.41 once again. Immediate support is at 75.27, a former resistance level dating back to mid-2018. Slipping back below that might open the door to test below $70/bbl anew, with perhaps a bit of friction near 73.14 along the way. 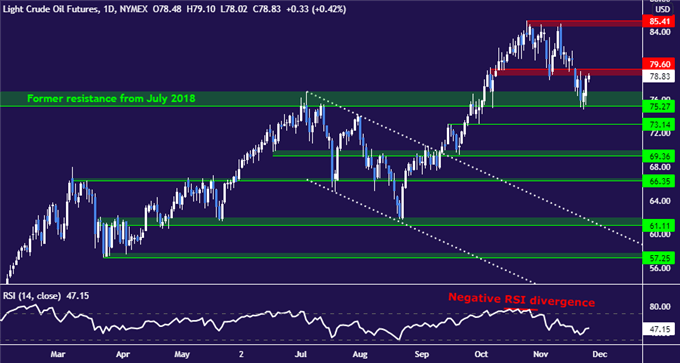