Currencies were generally quiet through the Asian session after the US Dollar came under pressure overnight. EUR/USD recovered from Wednesday’s low of the year and is trading near 1.1350. EUR/CHF hit a six-year low at 1.04985.

US Treasury yields across the curve have been trying to edge up, but all are mostly back to where they were on the US close. US 2-year is near 0.50 % and the 10-year around 1.60%.

Crude oil continues to recover from Wednesday’s rout while there’s still no official confirmation that the US will tap their Strategic Petroleum Reserve.

Gold remains in a 1850 – 1877 range after a solid move higher earlier in the month. Iron ore prices have remained in an unusually narrow range this week.

APAC equities had little to go from the US session, but Hong Kong’s Hang Seng index took a beating as tech stocks weakened on Alibaba’s earnings miss. Australian, Japanese, Korean and Chinese mainland bourses were all in the green.

In the background, the President’s nominee for the next Federal Reserve Governor position is being watched. The race is between the incumbent, Jerome Powell and Lael Brainard. The latter is considered more dovish by the markets.

Looking ahead, there is very little data due out in the North America, but Joe Biden’s massive stimulus plan is due to go to a vote in the House. There are also a couple of Fed speakers, Clarida and Daly, due to talk.

USD/JPY made a 4-year high earlier this week but was unable to follow through.

These short-term SMAs share a positive gradient with the medium and long-term SMAs as illustrated by the 55 and 200-day SMAs. This could suggest that bullish momentum remains. 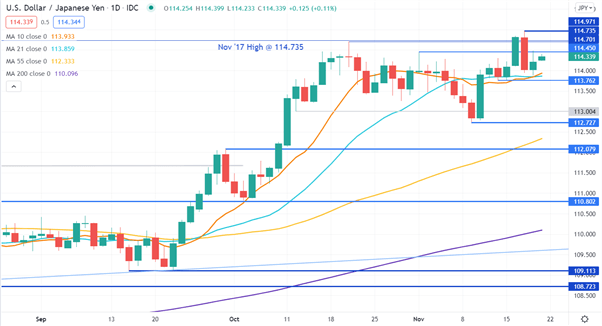