The Canadian Dollar dropped after CPI hit expectations. This disappointed domestic bond bears and rates there went lower to aid CAD depreciation. Canadian 10-year government bond yields went from a high of 1.81% to a low of 1.69%.

With yields heading south, gold found some luster and held the gains from the US session in Asia.

With equities sliding and growth assets looking less rosy, crude oil slid lower in the US session and continued lower through the far east. Speculation continued to swirl about the US dipping into its Strategic Petroleum Reserve.

In addition, OPEC+ have previously said that they believe production will be significantly higher into the earlier part of 2022. A report overnight from the US Energy Information Administration (EIA) concurs with this outlook.

The Australia and New Zealand Dollars were sold overnight with other risk assets but were the better performers in Asia today.

The Kiwi got a boost from the Reserve Bank of New Zealand’s inflation expectations data hitting a 10-year high. This led to speculation of a 50-basis point hike from the RBNZ next week.

Looking ahead, there are a number of ECB and Fed speakers, as well as US jobless claims data.

USD/CAD has rallied through the previous high of 1.26046 and the 10, 55 and 200-day simple moving averages (SMA) might be about to signal further bullish momentum. 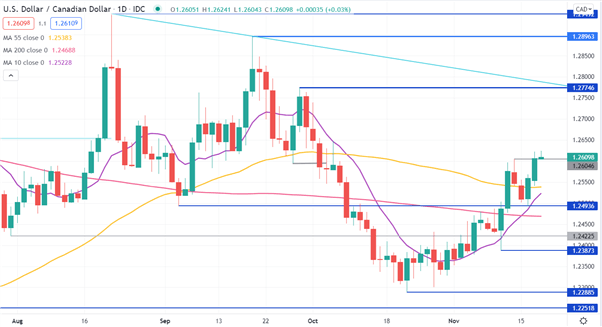