The Euro continued to threaten lower levels today as equity market routs continued on from the US lead. APAC shares went lower, except for a couple of Chinese indices buoyed as the PBOC added liquidity for the ninth day in a row.

Japan’s Nikkei 225 is down more than 2% as the ruling LDP party elected a new leader, Fumio Kashida. JGBs and JPY were little moved on the news.

EUR/USD continues to drift near yearly lows as soaring energy costs continue to raise concerns about the Continent economies’ ability to deal with the oncoming winter.

Several commentators have raised the spectre of stagflation, whereby an economy has high inflation and stagnating growth at the same time. If energy prices maintain lofty levels, this may contribute to higher costs throughout society and undermine some businesses’ ability to operate, hampering growth.

China today announced that it is looking at measures to assist power generators with price adjustments. Currently, the generators are paying high costs for coal and other energy sources, while the price they are able to charge businesses is regulated far below these costs.

The EIA/DOE Weekly Petroleum Report due out later today may have more attention than usual. OPEC+ will be meeting next week, 4th October.

EUR/USD has moved close to the August low of 1.1664 and the November 2020 low of 1.16026 is not far behind. These levels might provide some support on approach, but a break below there could see some bearish momentum emerge. 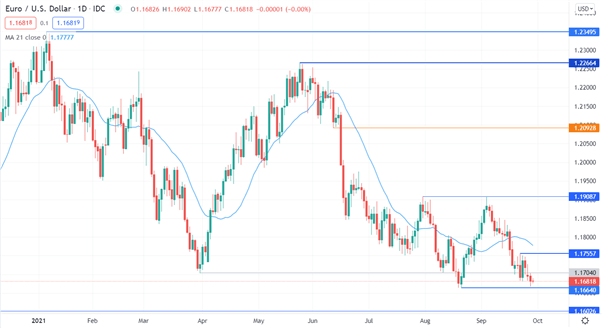