That Was a Technical Move that Doesn’t Merely Split Hairs

Last week, the possibility that risk aversion was gaining traction in the financial system was a debate. Sure, there was plenty of unresolved fundamental risks peppered throughout the markets and the S&P 500 technically closed below its 50-day moving average, but the potential for market fears is not itself deleveraging while the charts were more nuance than decisive. At the start of the new week, there seems to be far less debate with global equities leading a broader and more intensive sentiment slide throughout the financial system. My preferred – though imperfect – one-look-risk-measure offered a distinct breakdown Monday. The benchmark index distinctly cleared its channel floor on heavy volume. 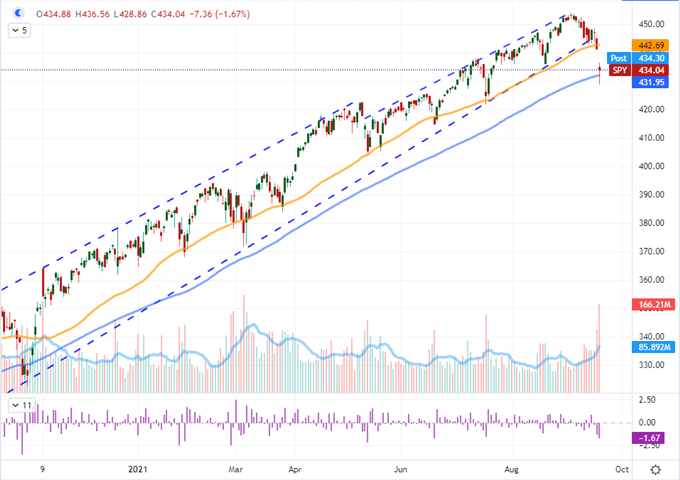 With the markets under such remarkable pressure, it is natural to look for a reason ‘why’. As expected, China’s Evergrande has stirred concern that an unresolved contagion risk could break the inherently-unreliable complacency providing stability. This is not the only abstract risk with potentially wide-ranging influence to the global markets. There is also the threat of the US debt ceiling breach at the turn of the month and the momentum of the most recent wave of coronavirus cases that pose their own threats. Yet, the situation with China’s second largest property developer had come to a head with the possibility of interest loan payment defaults on tap for this week. Thus far, it seems like the issue has not been ‘resolved’ by Chinese authorities, but it is highly unlikely that the government will allow this particular company’s troubles turn into an uncontrolled systemic threat to the Chinese economy. Nevertheless, when fear gains a hold, the particular driver matters much less to market participants that the deteriorating confidence itself.

Chart of Evergrande with Volume and 20, 50-Day SMAs (Daily) 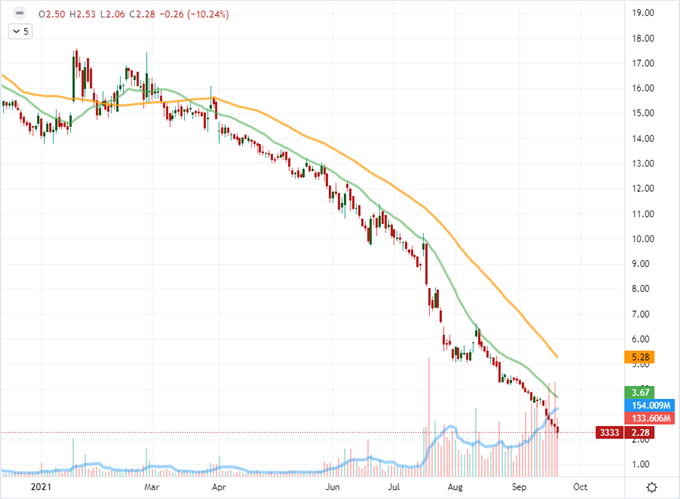 There is a dramatic difference between a particular market or asset class under pressure and a full-blown risk aversion. The former develops around specific catalysts but they tend to be less definitive and burn out more quickly. That is because the repricing effort can happen more quickly. When the issue at hand is general risk trends where the entire financial system is involved, the time and wealth involved to find equilibrium can be far greater. To gauge such a systemic view in the market, my preferred assessment is the correlation across otherwise loosely related assets. That metric offered a strong and clear signal to start this new week. The correlations across US and global equities, emerging markets assets, junk bonds, carry trade and commodities with a risk bent firmed up noticeably with a Monday retreat.

Chart of the S&P 500 Performance By Calendar Month 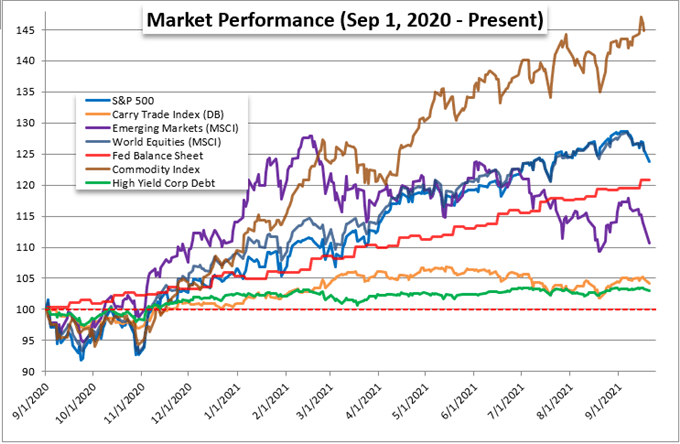 I would certainly say that risk aversion was present to start this week, but that doesn’t mean that there is a sustainable trend to fall back upon. Correlation across different assets is an important escalation to the case for sentiment, but sustainable trend is the threshold for conviction. I do not believe we have hit that highwater mark – though we could certainly develop a ‘taste’ for the tail risks that are made manifest against the backdrop of extreme exposure. Should sentiment take the lede, the current will run deep. Yet, until we see such a drive take root, history suggests it is better to remain skeptical. 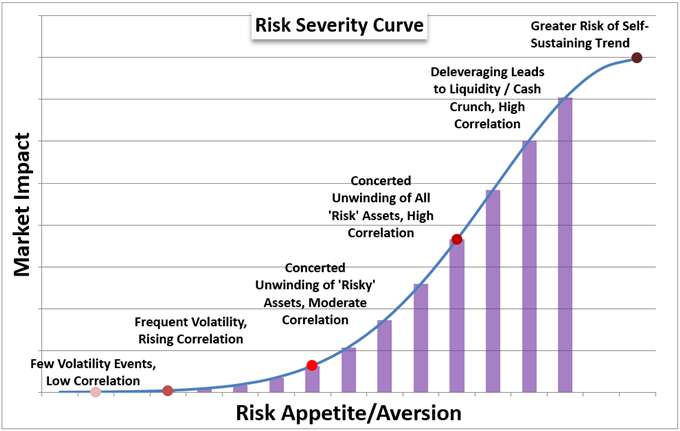 The Weight of the US Dollar

As we attempt to sort at the market’s allegiances in fundamental terms, the Dollar will be a preferred litmus test for my personal view on intent. I will note that through Monday’s session, despite the strong risk aversion that would develop, the Greenback did not hold onto serious traction as a safe haven. As it happens, other preferred havens of previous crises that tread on the appeal of their liquidity were enjoying sustained performance. That is a serious short-coming from the view of risk assets, but it was also a cap for traders looking for a clear setup in a market plagued by range. The DXY Dollar Index was up modestly through Monday’s session, but all those gains were given back before the close to register a slight loss on the day and maintain a ‘right shoulder’ on a head-and-shoulders pattern. 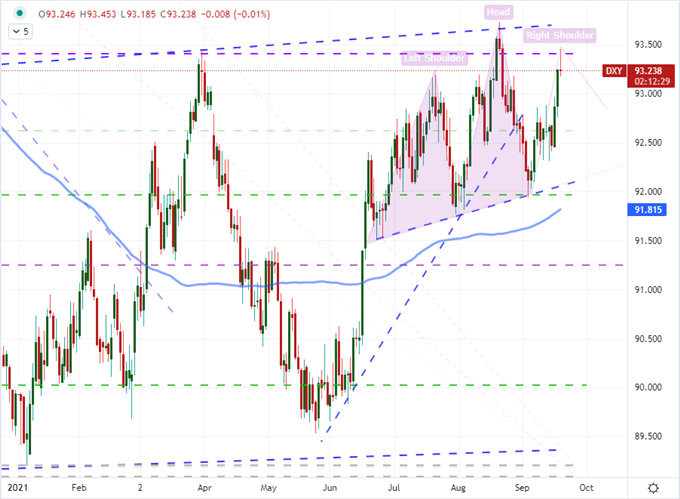 When it comes to the Dollar, the anticipation of major event risk later in the week may actually be working to cap risk aversion – when it is more often the agent of disruption for ‘risk on’ efforts. Feeding a deleveraging drive is just as speculative a venture as the opposite bearing, but here we are thrown off by the recognition that the Federal Reserve’s rate decision and forecasts are due on Wednesday afternoon DC time. That could prove a boon for those sporting a hold out bullish view (or more likely a buy-the-dip mentality) as commitment to the bear trend after a long hold out of post-pandemic climb is difficult to muster in these markets. We are looking at a baren 24 hours ahead without critical event risk on tap which will only intensify the impact of Wednesday’s major crop of events. 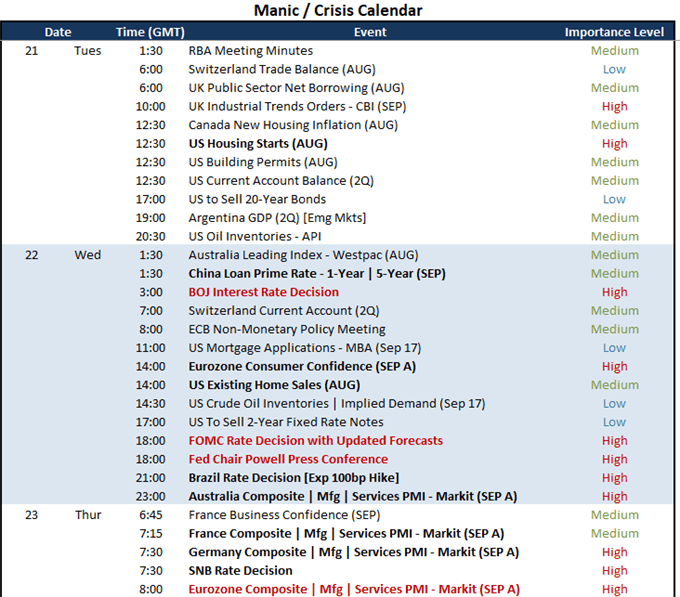 Looking further ahead, there are a few important aspects to the FOMC rate decision. First and foremost, I don’t expect the central bank will come close to entertaining a change to its benchmark rate. Instead, the questions will involve the intensions with the group’s stimulus program. The question of a taper is the market’s principal concern. Will the US policy authority be scared off from an overdue easing of its massive monthly asset purchases by a flighty financial system? We are in a scenario where the central bank may be ‘in the wrong’ regardless of the decision it makes. If the Fed were to taper, it could be seen as compounding the market’s struggles without the support of its biggest promoter. Then again, an extension of the $180 billion-in-purchases-per-month could be construed as admission that the financial system is so fragile it necessitates such tending to. 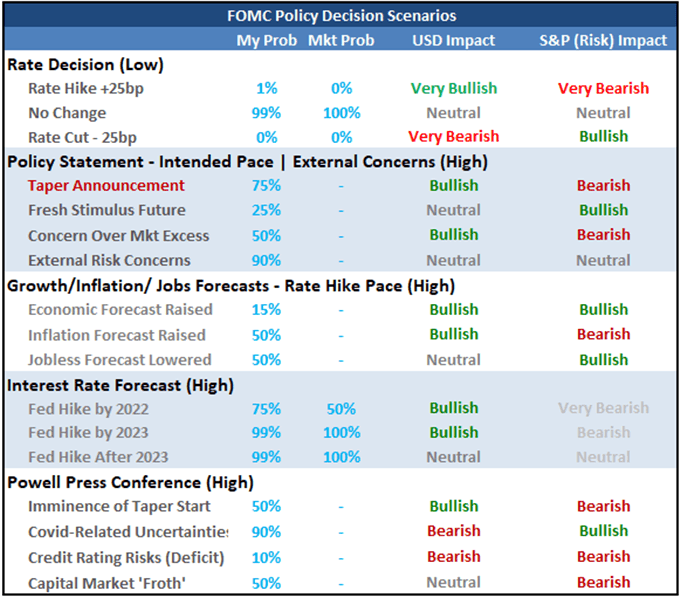 Outside of the FOMC decision, the docket from Wednesday into Thursday will punch well above its weight. I believe the holistic picture of monetary policy supporting an exorbitant risk perspective is a fragile disposition that the Bank of Japan, Bank of England and others (SNB, BCB, etc) will tap into. That said, the simple perspective of ‘growth’ is a more elemental measure that traders should be mindful of through this active week. The Markit’s monthly PMIs can prove far more important a market influence this go around given the general disposition, but the past month’s slide across board in the August numbers further sets the tone. 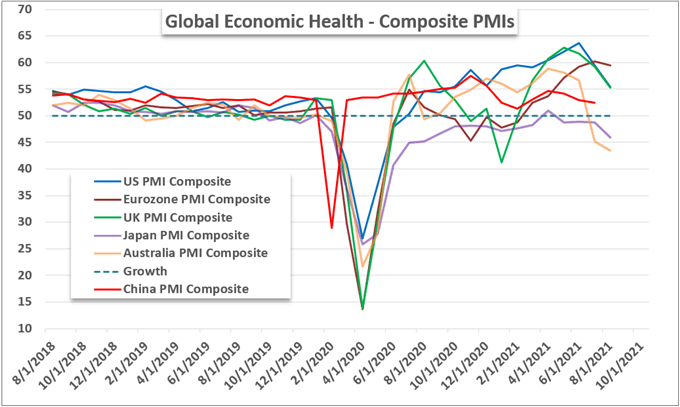 Chart Created by John Kicklighter with Data from Bloomberg, Markit

For market movement, the pointed ‘risk’ assets like the S&P 500 are most at risk for volatility, but I am more interested in those measures that can exploit more than the risk on / risk off balance. USDJPY is one such multi-faceted pair. The Fed is contemplating its eventual shift towards a hawkish group while the Bank of Japan has three decades of ultimate dove under its belt. What’s more, all Yen pairs are consider risk sensitive given their carry weighting which makes this a multi-dimensional pair. The most complex pair though heading into mid-week is USDBRL. Not only is there is a clear ‘risk’ lean to the pair, but the Brazilian central bank is expected by economists to hike its benchmark rate by 100 basis point – a serious escalation relative to the Fed’s mere taper timeline. 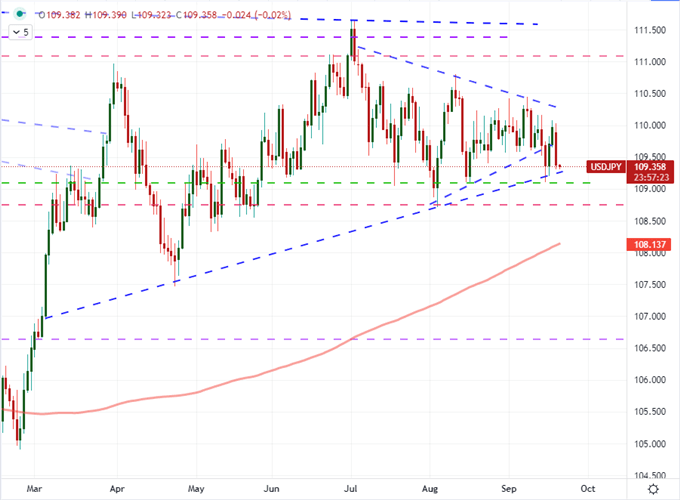